This exploratory talk will provide some reflection about the Khoja Shia Ithna-Asheri Community diaspora which is part of the global Indian community. It will begin by providing a rationale and conceptual framework used for the study and delve briefly into the circumstances under which the Khoja Shia Ithna-Asheries had to migrate from India and then emigrate to East-Africa, Europe, Canada, United States of America and elsewhere. It will explore the extent of acculturation and transformation that affected the community, its current challenges and whether it is able to overcome them.

JULY - 2017 - ELIMINATION OF POVERTY IN KSI MUSLIM COMMUNITY WITHIN 10 TO 15 YEARS: An Appeal to the Community– click on 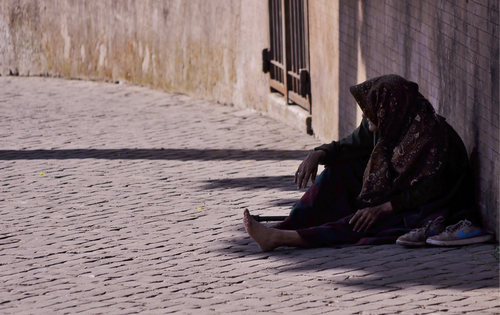 ELIMINATION OF POVERTY IN KSI MUSLIM COMMUNITY WITHIN 10 TO 15 YEARS: An Appeal to the Community

---- “Our community is sufficiently blessed with both financial and an entrepreneur resource, if sufficiently and properly directed, can eliminate poverty from the community. What needs to be conceived is an inspirational vision to eliminate poverty which is both pragmatic in its thinking and practical in its implementation. At the same time, leadership, entrepreneurs, professional, community workers and philanthropists within the community at all levels have to be mobilised with determination to implement the vision. If Allah swt wills, we can eliminate poverty within the next 10 to 15 years in our community world wide”

The first ever two day academic conference on Khoja Studies took place in Paris, France on 15thDecember 2016. The conference was organised by The World Federation in collaboration with FIU in Miami and CNRS- CEIAS in Paris. (For more information please visit the KHOJA HERITAGE on the World Federation website - www.khojastudies.org).
The two-day conference brought together scholars from variety of backgrounds in the humanities. Papers from varieties of discipline were presented on the development of Khoja Identity, its influence on others as well as how others have influenced and shaped the identity over the past three centuries among transnational communities in South Asia, East Africa, Western Europe, and North America.
‘The Awakening Project’ presented a paper at this conference. The full draft paper will be uploaded as well as sent out to the members of KSIMuslim community for their critical input, comments and reviews so that the paper has as wide input of the community as possible before publishing it. In the meantime, here below is the title of the paper and the abstract:

Just like any community and social group, the Khoja Shi’a Ithna-Asheri Muslim community (KSIMC) is not immune to the challenges of modernity and secularity which adversely affect the religious and cultural identity of its members. Current academic and community literature thus far has not focused on how we may manage this change effectively by preserving the KSIM identity but at the same time, redefining it to tackle contemporary social problems. I argue that the mimbar (pulpit), madrasah (seminary) and family units constitute the foundations of the KSIMC that are capable of evolving and providing much-needed direction to the community’s leadership and grassroots members.

The questions which this presentation will tackle are: how can the KSIMC forge ahead in a rapidly-changing modern society where an increasing mix between religious, secular and cultural values continues to occur? Could we say that after 50 years, the KSIM community as we know it today would exist with its enduring values and identity? Using a combined philosophical, sociological and data-led approach, I will lay out some of the emerging challenges from modernity which directly correlate to the primary data from two surveys I have conducted on the KSIMC. I will then argue that the mimbar, madrasah and family are crucial institutions to help redefine KSIM identity and finally, suggest possible solutions to remodel these institutions.
Dr. Sibtain Panjwani (B.D.S, M.A, PhD), United Kingdom
Founder of the Awakening Project for the KSIMC - http://awakeningproject.page.tl/

DECEMBER 2016 - What should be the purpose of life? (GUJARATI) - The discourse will attempt to reflect on how our lives fail to fulfill our potential. Please click on https://www.youtube.com/watch?v=CHLYOv0pHtQ

The recently held Khoja Heritage Symposium held at MARC in Toronto, brought together, young and old, men and women for a lively and candid conversation on the history and evolution of our community to help us plan for the days to come. It was a rare occasion for the eminent academics, historians and community elders form across continents to gather under one roof to define our rich heritage, and help us to better understand where we come from as well as provide moments of introspection to envision our future. Thank you to the Mulla Asghar Memorial Library & Islamic Resource Centre (MARC) for holding the event.


Speech of Dr. Sibtain Panjwani on 'Khoja Identity in the 21st Century':


MAY 2015 - Seminar held on the Awakening Project at The Research Institute of Al Mustafa International University - Mashhad
The seminar dealt with "Keeping Identity in the 21st Century: A case study of the Khoja Shia Ithna-Asheri Community" and was attended by scholars and students from various countries. 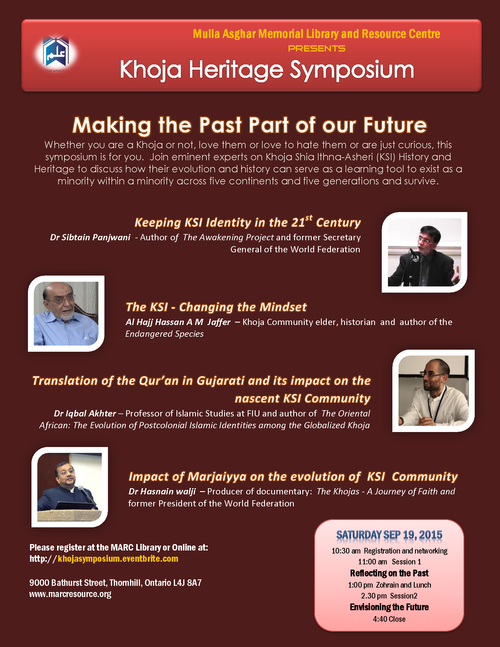